The queens of alpine skiing at la volata After the World Cup, La VolatA slope – the black diamond Champions of the San Pellegrino Ski Area – will host the Women's European Cup.

The queens of alpine skiing will trial themselves between the Col Margherita and the Passo San Pellegrino. On March 2 2021 and March 3 2021, thanks to Fassa Ski Team and its accurate set up,  the spotlight will be on the two Women's SuperG.

The promising European skiers, on their way to the World Cup, will compete against athletes from all over the world, ready to join the fray, after the revocation of several races on The Old Continent.

The VolatA, starts at Falcade (BL) and runs out in Moena (TN) and is the borderless black diamond considered the temple of international skiing, thanks to "Piste azzurre" a project by Val di Fassa to enhance the demanding San Pellegrino Ski Area, approved by FISI and FIS for downhill, superG, giant slalom and special slalom races.

The VolatA owes its name to its technical features: the slope stretches down a length of 2,400 mt, with a drop of 630 m and walls that reach a 50% slant. Leading edge of the Alps, it appears to be a perfect fit for even the pickiest skier. The starting point, a natural terrace at 2,514 meters,  is a tribute to the Dolomites. Col Margherita reminds an amphitheater, surrounded by delightful peak, is an adrenaline-pumping experience, even for the eyes. The homonyms cablecar allows to reach the top and leads to one of the most charming theaters in the Dolomites, from the south wall of Marmolada, to Mount Pelmo, from the magnificence of Mount Civetta and “Cima del Focobon” to the “Pale di San Martino”. The San Pellegrino Ski Area will host the women's downhill and super-G of the World Cup. Thanks to the "Piste Azzurre" project of Val di Fassa, on February 27 and 28, 2021, the elite of international skiing will put themselves to the test on "La Volata", the black slope of the champions.

This is the replay of two races cancelled a few days ago in Yanqing, China. "This decision, taken during the last FIS council meeting, represents a great satisfaction for our whole territory - says Mauro Vendruscolo, president of the San Pellegrino Ski Area -. The international spotlights are turned on one of the most adrenaline-filled slopes of the Dolomites, confirming the quality of the work carried out in these years by our collaborators, by the Val di Fassa and by our whole area".

"This is, once again, the recognition of Italy's great organizational skills and the willingness of the territory to be always ready for this kind of situation, on which FIS knows it can count," commented Fisi president Flavio Roda.

On La Volata, last winter, the Italian alpine ski stars tested themselves, among them Italian skiers such as Brignone, Bassino, Goggia, Pirovano but also the athletes of the German, Slovenian and other national teams. Among the big names that could be admired on this slope also Dominik Paris and Christof Innerhofer. 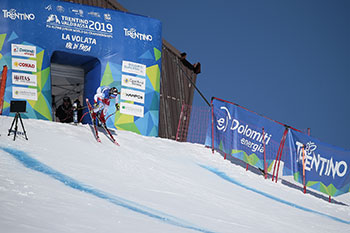 Just one month separates the Val di Fassa from the Alpine Skiing World Cup, after having chased it for more than 30 year. On Friday, February 26th, the slope La VolatA in the ski area San Pellegrino will host the first of three women speed events, entrusted by FIS to the Ski Team Fassa. Three races that will be preceded by two days of training. The programme will start with the Downhill that should have taken place in Garmisch-Partenkirchen, followed by a second Downhill on Saturday 27th and by a Super-G on Sunday 28th, both scheduled in Yanqing.

This is a very important occasion for Val di Fassa to show its organizational skills and therefore the committee that will face this challenge has been made up in a record time, to perform well in order to gain a steady place in the next World Cup calendars.

The executive team, headed by Andrea Weiss, is made by the vice-president Davide Moser, also representative of the Municipality of Moena, by Leonardo Bernard for the Ski Team Fassa, Tiziano Mellarini for the FISI and Renzo Minella for the Ski Area San Pellegrino. Cristoforo Debertol has been chosen for the key role of event manager, while Cesare Pastore and Rainer Senoner are the race directors.

Now the slope La VolatA is being accurately prepared according to the FIS rules, after the technical inspection made by the FIS responsible Peter Gerdol, also in order to write the health protocols. From next week already, the slope will be open for the first training sessions of the Italian National teams, to refine the preparation for the upcoming World Ski Championships in Cortina d’Ampezzo.

To accompany this 30-day countdown, the Organizing Committee has made a suggestive video clip - which can be watched on the Val di Fassa official Facebook page -, which narrates the history of skiing in the Ladin valley and in which one of the event testimonials, the Kitzbühel champion from Moena Cristian Deville, presents La VolatA.

So, Val di Fassa is ready to enter the world of the top-class skiing: an opportunity to show its connection with the alpine skiing, first as a resort that is part of the biggest ski carousel in Europe, the Dolomiti Superski, and then also as a destination whose sport story starts back in 1988, when the champion Alberto Tomba began to train here with his coach Flavio Roda (now FISI president). A story that was reinforced in 2001 with the first of 28 European Cup races and then in 2006 with the beginning of the Piste Azzurre project, which entitled the valley as the training center of the Italian National team, passing through the extraordinary experience of the 2019 World Junior Alpine Skiing Championships, whose closing ceremony also took place on February 27th. More than 80 international FIS races have been hosted here till nowadays

Up to now, unfortunately, the stop of the ski season hasn’t given the possibility to enjoy the new works of the lifts companies, such as the new lifts in the ski area Belvedere in Canazei, where the new 6-seat chairlift Kristiania awaits the skiers, and in the ski area Carezza, where there’s a brand new 10-seat automatic coupling cabin lift and a longer version of the 6-seat automatic coupling “Tschein” chairlift.

In the ski area Buffaure in Sèn Jan/Pozza di Fassa, the red slope Buffaure di Sotto has been modified and has been turned into a blue slope, to become a perfect field school, equipped with a carpet too. The snowing system then has been enhanced by “Ski Stadium Aloch” in Pozza, also federal training centre part of the “Piste Azzurre” project in collaboration with FISI.